What to visit in the surroundings

Don’t miss that!… at a stone’s throw from the house 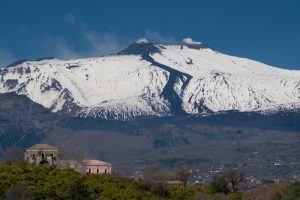 3.350 meters high, Mount Etna is the highest active volcano in Europe and without a doubt one of its most spectacular natural wealth.
UNESCO world heritage site, you’ll enjoy there an exceptional variety of hiking, walking and trails.
To access the top craters you have to be accompanied by a volcanologist guide (paying excursions). You may walk and hike free on numerous places of the volcano and discover the great diversity of landscapes it offers. 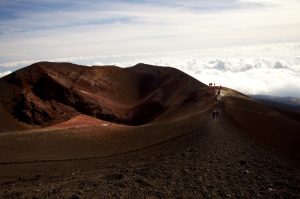 You can also take the cable car and the jeeps, to reach 2.900 meters; you may walk on the 2002 and 2003 impressive craters without effort, to enjoy a 360° amazing view on all the Ionian coast having at your back, a few hundred meters away from you, the top craters!
In winter time , after reaching one of the two ski stations, try the unique and breath-taking experience of skiing on the slopes of a smoking volcano and the sea at your feet! You may also enjoy numerous snowshoeing or ski touring riding. 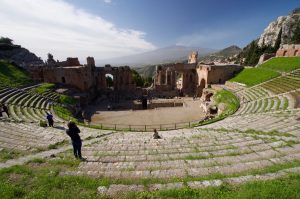 Taormina and its Greek theatre

Taormina is one of the most popular destination of Sicily. Its old Greek theatre overlooking both the sea and Mount Etna might turn into the most famous postcard of the island. 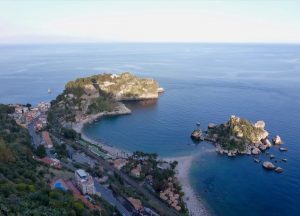 Built on the slopes of mount Tauro, the medieval town is a major architectural and historical highlight. The seaside is also beautiful, most of all Isola bella laying at its feet. 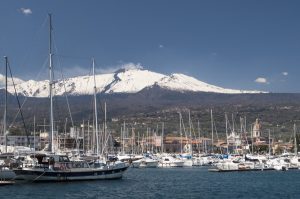 The coast near the house

Our guesthouse is 4 kilometers away from the sea, the closest beaches being Torre Archirafi’s and Fundachello’s.
The beach made of little pebbles has crystal waters of tropical colors. You’ll find free empty spaces or the comfort of a private lido, you may choose. 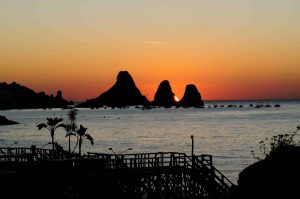 A few kilometers south, the volcano has created an amazing lava coast: from the natural swimming pools of Pozzillo to the tremendous faraglioni of Aci Trezza you’ll be stunned by the incredible shapes and colors of the waterfloors. 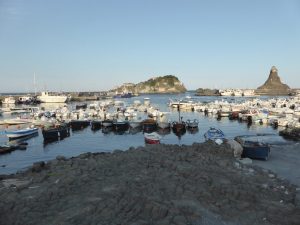 The Faraglioni in the cyclopes riviera are a fishing reserve and definitely worth a snorkeling experience.
Do not miss a stop at Aci Trezza small traditional fishing harbor where you’ll find Sebastian and his family running one of the last traditional shipyards, making up or fixing small traditional Sicilian wooden ships in an ancestral way. 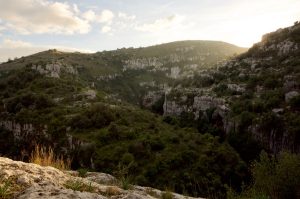 Within an hour and a half drive from the house, you must absolutely visit the necropolis of Pantalica, UNESCO world heritage site, and observe troglodyte caves and prehistoric villages surrounded by a tremendous natural environment. Pantalica is indeed a wide canyon of lush vegetation, at the bottom of which runs the Anapo river.
You’ll be stunned by the sight of thousands of caves and graves carved in the stone, on the cliffsides… a really unprecedented landscape, full of energies. 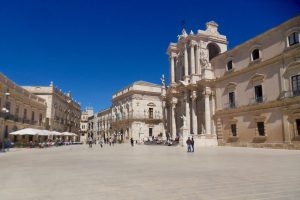 Siracusa, ultimate historic site, wonderful and fascinating, is another UNESCO world heritage site. Magna Grecia Capital city, which was Sicily, Siracusa is a genuine jewels nestled on a peninsula. Mixing ancient and baroque remains, the old city of Ortygia is a not-to-be-missed stop of your Sicilian trip. Let yourself be charmed by Siracusa’s dolce vita, enjoying your granita sitting at the terrace of a café. 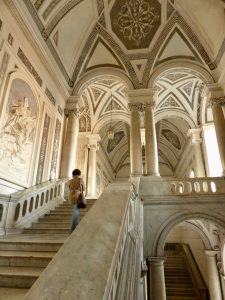 Young and dynamic city, Catania is the second metropolitan area of Sicily. It’s clearly worth a visit, as for the folklore of its lively fish market and its nightlife, its fascinating lava stone-made buildings or its architectural both ancient , dating back to Magna Graecia and baroque heritage.

Book it now
Scroll to top
Booking online by Hotel.BB